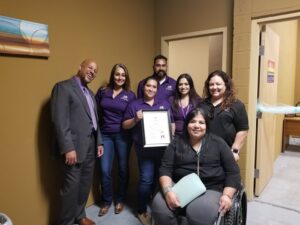 La Casa, Inc. was highlighted in an amazing article by Mike Cook of The Las Cruces Bulletin, “Domestic violence: Mary’s story of survival and triumph.”

We want to share with you this article that gives a glimpse of how La Casa, Inc. works and helps survivors.

“I’m a survivor,” said a Las Cruces woman about her 17-year struggle with domestic violence.

Mary (not her real name) was 18 years old when she met Frank (not his real name), the man with whom she would begin a long-term relationship and have a child.

“When I met him, he was super mysterious,” Mary said. “I never really put up red flags with him because he was so charming.”

The two began dating and were “doing really good,” she said. Then, one morning, “I was nagging him,” Mary said, because she was late to work. She was driving him to his house before she went to work. He told her to “be quiet or I’m going to get you quiet.” Mary said she kept nagging him, and “all of a sudden I just saw knuckles coming toward my face. It happened so fast.” She was bleeding as she continued to drive the car, and was also crying by this time, Mary said. Frank told her “to get quiet” or his response “would get much worse.”

“That was my introduction to the world,” Mary said.

When she began visiting La Casa more than two years ago, “I was really broken down,” Mary said. “I’ve learned super wonderful things there.” La Casa, she said, has offered her “super wonderful support,” and a safe haven. “They never looked at me like a victim,” Mary said, seeing her instead as “a person who shared my story. I felt dignity going there instead of being judged.” La Casa’s question to Mary, she said, was “’How can we help you?’”

“I got to hear other stories,” she said. “Other couples are going through this.”

That helped Mary to find the voice to speak up for herself, she said, and the courage to set personal boundaries.

Mary has also learned from La Casa that she is okay without Frank.

“My role there is to provide education, advocacy and support,” said La Casa Lead Nonresidential Case Manager Stacy Carbajal. “Domestic violence is a viscous cycle,” she said. “We understand that.”

Mary said La Casa has never pressured her to end her relationship with Frank. Instead, she said, “they gave me tools on how to make my relationship healthier,” and also to help her deal with the shame she has experienced because of the abuse.

Carbajal remembers Mary was surprised when she was told she would not have to give up her relationship with Frank to continue treatment at La Casa. “It’s your choice,” Carbajal told Mary.

La Casa helped her with creating boundaries and learning to be more assertive to create healthier relationships, Carbajal said, so Mary could decide for herself about her future.

Mary said she would recommend La Casa to anyone dealing with domestic violence. “You don’t have to be silent,” Mary said.

Thank you Las Cruces Bulletin for sharing Mary’s story. We are so glad to be able to help and to be a part of her survival story.

You can read the full article here.[/vc_column_text][/vc_column][/vc_row]

Kellie Dinsmore is a lifelong resident of Las Cruces who has been a board member of La Casa for almost 3 years.  She has recently retired after a 27 year career teaching special education for Las Cruces Public School.

Chantelle Yazzie-Martin is proud to present a selection of her work.  She grew up in Smith Lake, New Mexico and is part of the Navajo tribe.  She graduated with her Bachelor’s degree in Social Work from Calvin College in 2015 in Grand Rapids, MI. In 2016 she graduated with a Master’s in Social Work. She currently lives in Las Cruces, NM and works as a mental health clinician, photographer, blogger, and artist addressing Indigenous social justice issues and cultural preservation among her Native tribe using a variety of media including photography, sculpture, graphic design, and printmaking.

Colleen J Pullen has worked in the banking industry for over 25 years, and Human Resources for 13. As a survivor of childhood domestic violence, she is honored to serve both her adopted hometown and on the Board of La Casa.

Lani Bradley is originally from Chicago, IL, she is a mom of three young boys, a small business owner and spends her free time volunteering throughout the community.  She had been volunteering with La Casa for 5 years before joining the Board of Directors.

In a small community in Santiago, Chile, men, and women went years with undiagnosed hypertension, diabetes, and heart disease. Seeing the need, Anna created a diagnostic screening clinic, funded and staffed it, then turned it over to trained personnel. Anna has a unique ability to observe, analyze, and get to the heart of the issue while putting a plan of action in place. She brings creative solutions to solve everyday problems. Her careers as an RN, missionary, and entrepreneur bring a diverse skill set to the board at La Casa.